Recently, as July wrapped up, SEAD Gallery experienced an exhilarating highlight in our mission to inspire and educate people about the relationships among Science, Engineering, Art and Design. Monday, July 22nd, around 9 o’clock a group of kids with no idea what to expect, but anxious and eager to learn began to filter in for our first ever “Camp Innovation.” Being the first time we would offer such an experience, we will admit the anxiety and eagerness was not limited to only those under 4 feet tall.

Our team worked for months to prepare activities that would teach our small innovators about things like robotics, gardening, physics and creativity. All the hours spent in preparation were about to be put to the ruthless test of 8-year old attention spans – parents with elementary age children can sympathize. We wondered if we would see kids be engaged and inspired or what every educator dreads most – kids wearing the dull, expressionless face of boredom. 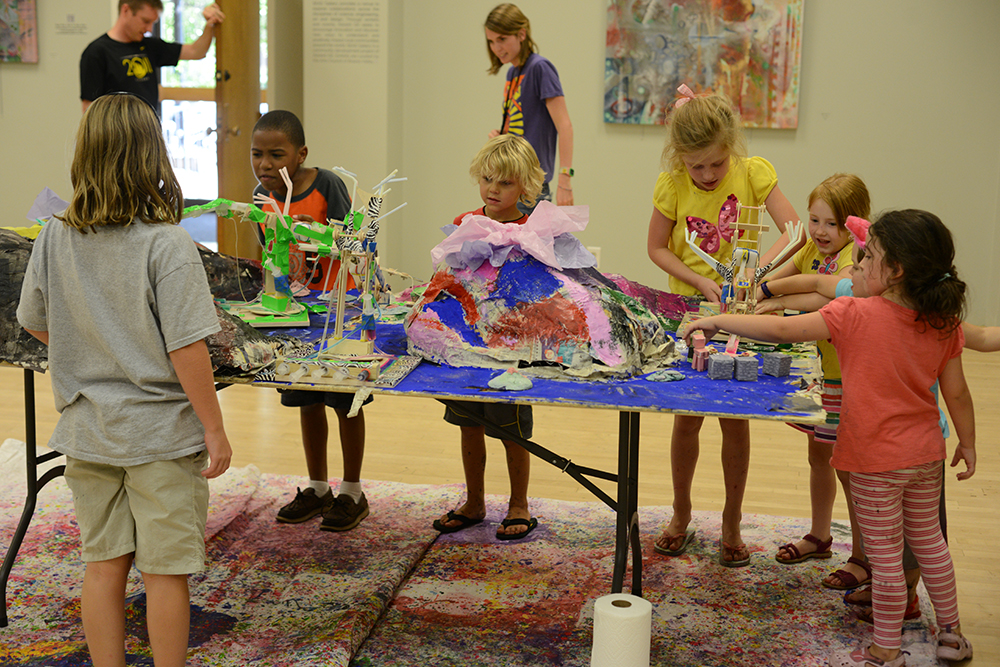 The kids “oohed and ahhed” over hydraulic robots made using wood and syringes, coffee cup racers and clouds of soap. They got to play nurturer and learn about horticulture in the garden as they potted little seedlings they would later take home. The kids also had the opportunity to exercise their creative muscles when we asked them to envision and ultimately create out of paper mache their own world complete with unique climate, animal life, vegetation and topography.

The finished product, creatively dubbed “Big Donut,” was a partially submerged cluster of islands, which touted multiple active volcanoes and several species of fish, which had adapted to live in its harsh conditions. As further evidence that we were working with young pliable minds, some of the volcanoes erupted with not just lava, but rather unusual explosions of fairies and spiders.

Seeing the way their minds soaked up knowledge, while simultaneously oozing creative juices was inspiring and reminded us that while the kids had a great deal to learn from us – we also had a great deal to learn from them. Knowledge for its own sake has limited utility; but when that knowledge is combined with visionary creation we have the potential to be truly innovative – and that is what Camp Innovation is all about.