On Thursday evening, February 28, SEAD Gallery ushered in the opening of its second show. After saying good-bye to Anguspaul’s Colorpalooza, the gallery welcomed Scott McDermott, a College Station native who calls the Brazos Valley home, and his show Procrastus Interruptus.

At the second SEAD Gallery opening, to have attendance at least double from 75 guests to 150 plus people shows how word is catching on about the gallery in our community! We couldn’t be happier to see that people are starting to understand SEAD’s mission to provide a special kind of venue for art in downtown Bryan.

Several repeat visitors, as well as many new faces joined the warm and lively atmosphere. Scott having grown up in the area afforded a swarm of locals who wanted to see his progression and development from a kid they once knew who could draw to the professional artist who has a show hanging in a local gallery space.

Many comments centered around the fact that there are gallery spaces such as the SEAD’s in this community now as compared to years ago. To have a place where art can be displayed, enjoyed, purchased and made known to the public is a common goal of many of the patrons who joined us that night.

SEAD Gallery’s mission is to provide collaborations across the disciplines of science, engineering, art and design and through exhibits and events, and to encourage innovation and discovery of new ways to understand and positively impact communities, not just here in Bryan/College Station, but around the world. To start with local artists such as Scott McDermott, and before him, Anguspaul, is a way to make sure we draw in the patrons who mean the most to us–our local arts supporters.

Thanks to Cassidy Barton for organizing the event and to Jose Quintana, president of Advent GX and Chris Dyer of the Arts Council Brazos Valley 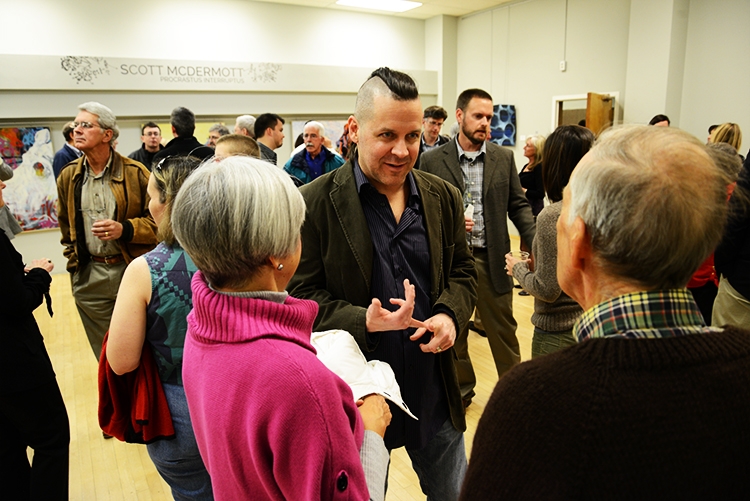 for speaking to the crowd at the reception and educating the audience on our mission. Special thanks to Scott McDermott for bringing in a cadre of supporters and faithful friends to make our second opening a truly special night.